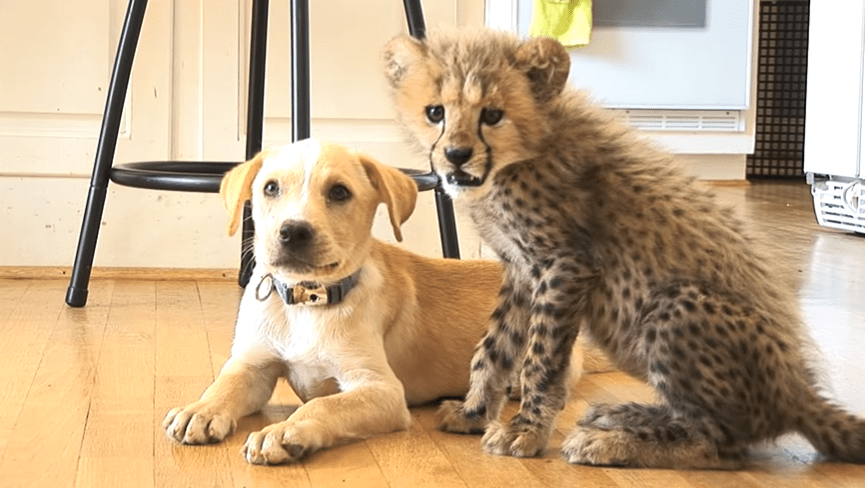 When you see a cheetah, the first thing that comes to your mind is that it is dangerous because it is a wild animal. However, this cheetah was raised in the zoo and became best friends with a dog. The bond of the cheetah and the mix Labrador dog would make you second guess about your thoughts towards wild cats.

The cheetah, named Kumbali, lost weight when it was only two weeks old as it was not getting enough milk from its mom. The zoo keepers decided to hand-raise Kumbali and bottle-fed the cat with the much-needed milk.

Alain writes in the comments:

The most beautiful relationship in the world is friendship.

Kumbali steadily progressed until the zoo keepers determined that it needed a companion. That was when Kago, a mix Labrador dog rescued from a shelter, came in the picture. Their first interaction was a bit shaky but after determining that they can be playmates, the two quickly became best buds. They were kept in the home of a zoo keeper to closely monitor them. When they became older, they were moved to an outside enclosure.

The symbiotic relationship between Kumbali and Kago will never happen in the wild, but it was very successful when the two were placed in captivity. Kago’s calmness helps Kumbali remain calm as well.

One can really say, this is a unique companionship between a cheetah cub and puppy! Do you agree? If you do, share this video on Facebook!

Why does your dog lick you? One of the most common reasons for a dog to … END_OF_DOCUMENT_TOKEN_TO_BE_REPLACED

Do dogs have third eyelid? While a dog's third eyelid should not protrude … END_OF_DOCUMENT_TOKEN_TO_BE_REPLACED

How many puppies can a dog have? The size of the litter will ultimately … END_OF_DOCUMENT_TOKEN_TO_BE_REPLACED

How often dog pee? A dog's peeing schedule can vary based on his or her age … END_OF_DOCUMENT_TOKEN_TO_BE_REPLACED