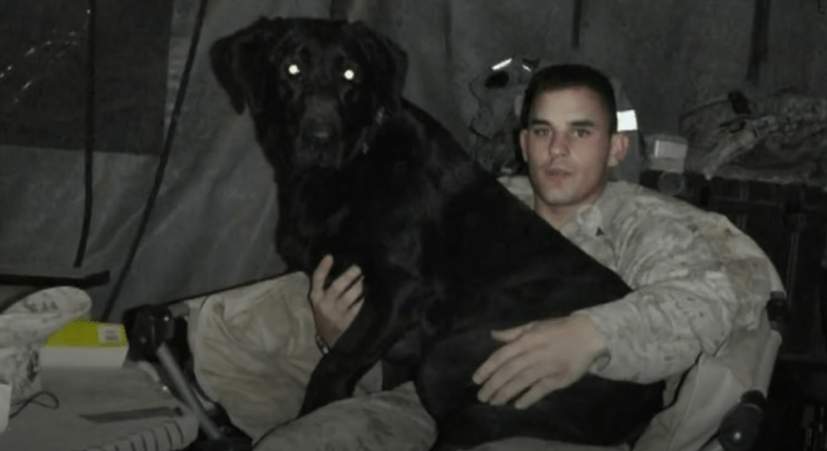 Some dogs get trained for doing things that we never imagined dogs could do. One doggie owned by a Marine was already dying and his owner gave him a heartbreaking and heartfelt farewell.

That dog is named Cena and he served the Marines alongside Cpl. Jeff DeYoung. The dog was with DeYoung when the animal was still part of the Marines and they tackled a lot together in the frontlines. Their friendship extended up to when the dog was already retired and DeYoung enjoyed the civilian life.

The two shared so many things and had a lot of wonderful memories. Cena, unfortunately, had terminal cancer. So when it came to the time that Cena was set to pass, DeYoung arranged his final ride. The whole community was there to join DeYoung bid his farewell to Cena.

Sherie writes in the comments:

This was so touching. Being a dog owner, I felt his pain. RIP. Lil one!!!

DeYoung knows that Cena loves rides so he gave him just that during his final moments. DeYoung said he just wanted Cena to feel the wind on his face before he passes away. DeYoung noted of Cena, “He’s not just a dog, he is family and he is a marine just the same.”

So many dogs are abandoned and neglected by their former owners. Some went … END_OF_DOCUMENT_TOKEN_TO_BE_REPLACED

Am I hiring the right dog trainer? Apparently, there are frauds everywhere … END_OF_DOCUMENT_TOKEN_TO_BE_REPLACED

How many puppies can a dog have? The size of the litter will ultimately … END_OF_DOCUMENT_TOKEN_TO_BE_REPLACED