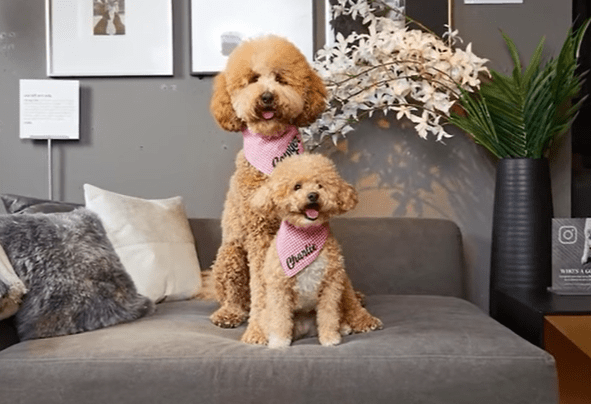 Two dogs owned by the same human are like twins and the only difference between the two animals is their heights. The doggies, named Sawyer and Charlie, are not in any way related as both dogs were rescued years apart and are different breeds.

Mikey writes in the comments:

I think saying this is an awesome video is purely an understatement. It’s incredible how animals can amaze us in ways we least expect and how they can be super adorable at the same time! Loved it!!!!😄😄

Sawyer, the younger dog, is even often mistaken for as Charlie’s mom. Charlie, however, is older than Sawyer and was rescued first before Sawyer. The owner of Sawyer and Charlie said that one person who saw the dogs even commented that the animals look like a capital letter and a lowercase letter because of their similarities and difference.

According to the dog owner, the two pups were almost the same size when she adopted the younger dog. However, as days passed, Sawyer started growing bigger and bigger. Sawyer is now twice the size of Charlie but they still look so much alike.

The dogs are so close and enjoy playing together. Charlie, however, is sometimes frustrated that he is so much shorter than Sawyer because the latter dog can reach most things that Charlie cannot. Although Sawyer is bigger than Charlie, the older and smaller dog is the boss of him and tells Sawyer what to do.

They also enjoy their nap time together and Charlie does not mind being the smaller spoon. Love definitely comes in all sizes and this duo is the best example for that.

Discover 15 of the cutest dog breeds. Are you a person who loves dogs and … END_OF_DOCUMENT_TOKEN_TO_BE_REPLACED

How often dog poop? There is a misconception that every dog must poop at … END_OF_DOCUMENT_TOKEN_TO_BE_REPLACED

Our neighbor, according to one blogger, has the apt name Eva Foster, … END_OF_DOCUMENT_TOKEN_TO_BE_REPLACED

The training of police dogs is rigorous and costly, taking up to three … END_OF_DOCUMENT_TOKEN_TO_BE_REPLACED

A three-legged dog was supposed to be euthanized. Thankfully, her new owner … END_OF_DOCUMENT_TOKEN_TO_BE_REPLACED

Alex loves dogs and would argue that his love is unmatched by anyone else. … END_OF_DOCUMENT_TOKEN_TO_BE_REPLACED