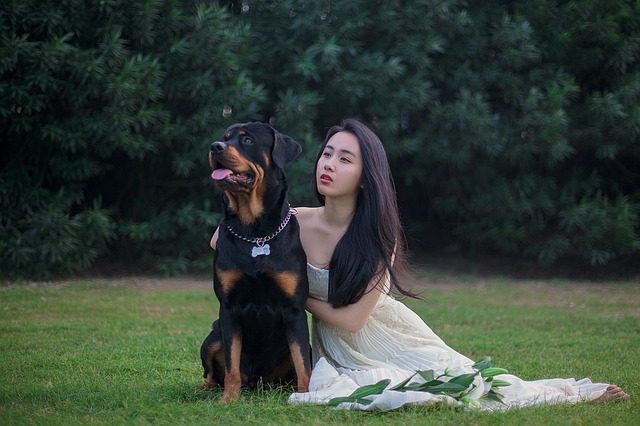 Human with dog has a very long relationship. When you see a dog accompanying his human, we see just how beautiful the relationship is. You probably won’t believe it, but dogs are the first animals to ever show protective instincts for man. It was around more than 15,000 years ago when the harmonious relationship first began.

Summary:
– Amongst all the animals, dogs seem to be the closest creature to humans.
– This relationship actually dates way back in time.
– There is a deeper history as to why dogs are tagged as man’s best friend.

It was mutual respect and love at first sight, mostly attributed to the fact that the ancestral origins of dogs are said to be the fierce and loyal wolves.

So if you ever look at your furry little friends, always remember that your love for them stems from way back centuries ago; thus, explaining the intimate connection between our species and theirs.

Fundamental to the relationship of human with dog

Fundamental to the relationship of human and dog: Understanding each other.

So dogs and humans have lived together for centuries and are close in many ways. Dogs are very similar to humans in their social behavior – this is what makes living together with them possible at all compared to other animals.

For example, dogs can read a person’s facial expressions and see whether their owners are sad or stressed. Even if we point our finger at something, a dog understands that it should follow the finger with its gaze – something that hardly any other animal can do.

Dogs can also lie or strategize. And they are very cooperative: hardly any animal would allow itself to be taught as much as a dog. This willingness to cooperate lays the foundation for the special relationship, so to speak.

It is a millennia-old relationship. That the dog descended from the wolf is undisputed today. It is also clear that his friendship with our species is ancient. It began in the Stone Age, 15,000 to 100,000 years ago.

At that time, when Homo sapiens roamed as hunter-gatherers, he came upon the wolf. Or rather: the wolf came upon man.
Strong bond thanks to cuddle hormone

The chemistry between man and dog is simply right. This is demonstrated by the “cuddle hormone” oxytocin, known for its role in the bonding of mother and baby.

It is also released in humans and dogs when both look into each other’s eyes. The fact that the hormone is active here across species boundaries is remarkable – perhaps even unique.

Can Dog Eat Pineapple? You can feed your dog pineapple. However, you must … END_OF_DOCUMENT_TOKEN_TO_BE_REPLACED

Many dogs can already do basic tricks, but if you want your dog to impress … END_OF_DOCUMENT_TOKEN_TO_BE_REPLACED

A momma dog wanted to save her puppies. They were living outside and the … END_OF_DOCUMENT_TOKEN_TO_BE_REPLACED

Cat and Dog Christmas feast! During the holidays, some dog owners forget … END_OF_DOCUMENT_TOKEN_TO_BE_REPLACED

Dog barking at mail carrier, how to stop. We all love dogs because they are … END_OF_DOCUMENT_TOKEN_TO_BE_REPLACED

Dog Like Husky? If you are looking for a dog with a unique appearance, you … END_OF_DOCUMENT_TOKEN_TO_BE_REPLACED