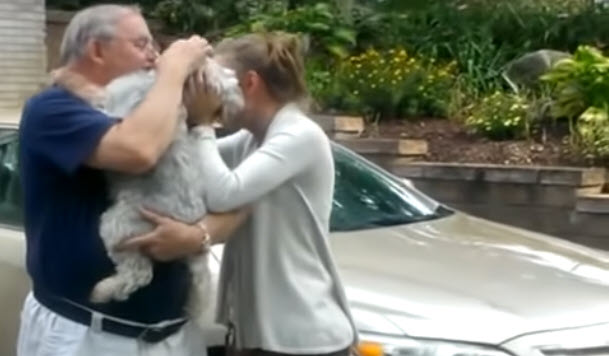 A doggie was videoed being overwhelmed upon seeing its owner to the point of passing out! The video has received more than 54,857,110 views!

Dogs are sociable creatures that they get very thrilled when they see their humans. You would know how dogs miss you just by how excited they are upon seeing you when you have been gone for a day or just a few hours.

Keith writes in the comments:

This dog, however, even fainted as it was so happy to see its human! Accordingly, the dog and its human haven’t seen each other for two years after the owner, Rebecca Ehalt, had to move abroad for work.

She left her doggo, a nine-year-old silver Schnauzer named Casey, with her family. Ehalt finally went back to Pennsylvania and the video of their reunion shows how much the dog missed its human.

As the dog regains its composure, it continued to seemingly hug Ehalt as she picked it up from the ground. Dogs are definitely loyal and sweet companions!

Abandoned Dog Gets A Makeover . A dog named Rupert is 11 years old and … END_OF_DOCUMENT_TOKEN_TO_BE_REPLACED

A pitbull is such a diva! She is the most high maintenance dog you will … END_OF_DOCUMENT_TOKEN_TO_BE_REPLACED

A dog suffered from a frost bite. He was so scared and appeared to be … END_OF_DOCUMENT_TOKEN_TO_BE_REPLACED