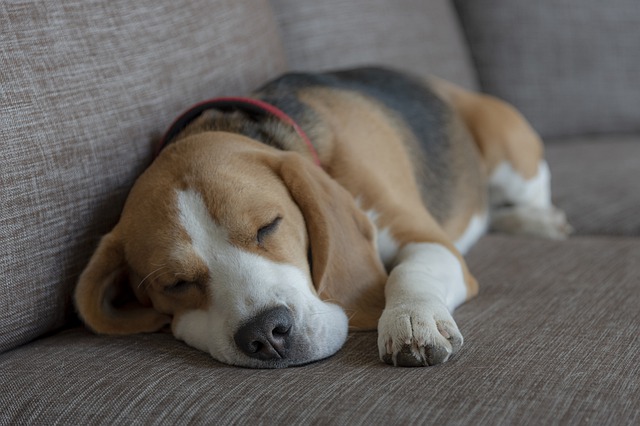 If you’ve seen a Facebook post that says someone is giving away a senior dog and has to be taken in a few days, what would you do? Well, this couple faced that exact situation and had to drive for hours just to make sure the dog has a new home!

Robert writes in the comments:

If only some of the people of the world were made up of this kind of love and compassion. There would never be war. Outstanding save💗

It was a three-hour drive but the couple did not mind. They just wanted to get to the dog that was being given away to help her have a comfortable life.

Senior Dog Was Not At The Best Shape

The new owners of the senior beagle said that she smelled bad and her nails were overgrown. It was evident that she was not well taken care of. The dog also looked terrified, but the couple did not know the dog’s story with her former owners.

During the first days that they had the senior dog with them, the dog would just sleep in one spot and curl into a little ball. The new dog owners knew she had to feel she was loved in that place so she could shine through.

Later, the dog and the other dog that the couple owned clicked. The other dog helped the senior dog open up.

The dog started to show she was such a sweet animal and loved getting spoiled. She is also very playful, happy, and more energized now.

Everyone should watch this video because it shows how much a shy dog can turn into an amazing one with all the love and care it deserves!

What are the 6 reasons dogs eat poop. Are you searching for the best way to … END_OF_DOCUMENT_TOKEN_TO_BE_REPLACED

Dog Christmas. Dogs love the holidays, too, as they get a lot of presents … END_OF_DOCUMENT_TOKEN_TO_BE_REPLACED

Can you imagine a tiny kitten snuggles with a big dog? A tiny kitten named … END_OF_DOCUMENT_TOKEN_TO_BE_REPLACED

A tiny dog was found as a stray and was left behind by someone. The dog was … END_OF_DOCUMENT_TOKEN_TO_BE_REPLACED

Dog and Kitten, how do the go together? A service dog named Samson was very … END_OF_DOCUMENT_TOKEN_TO_BE_REPLACED